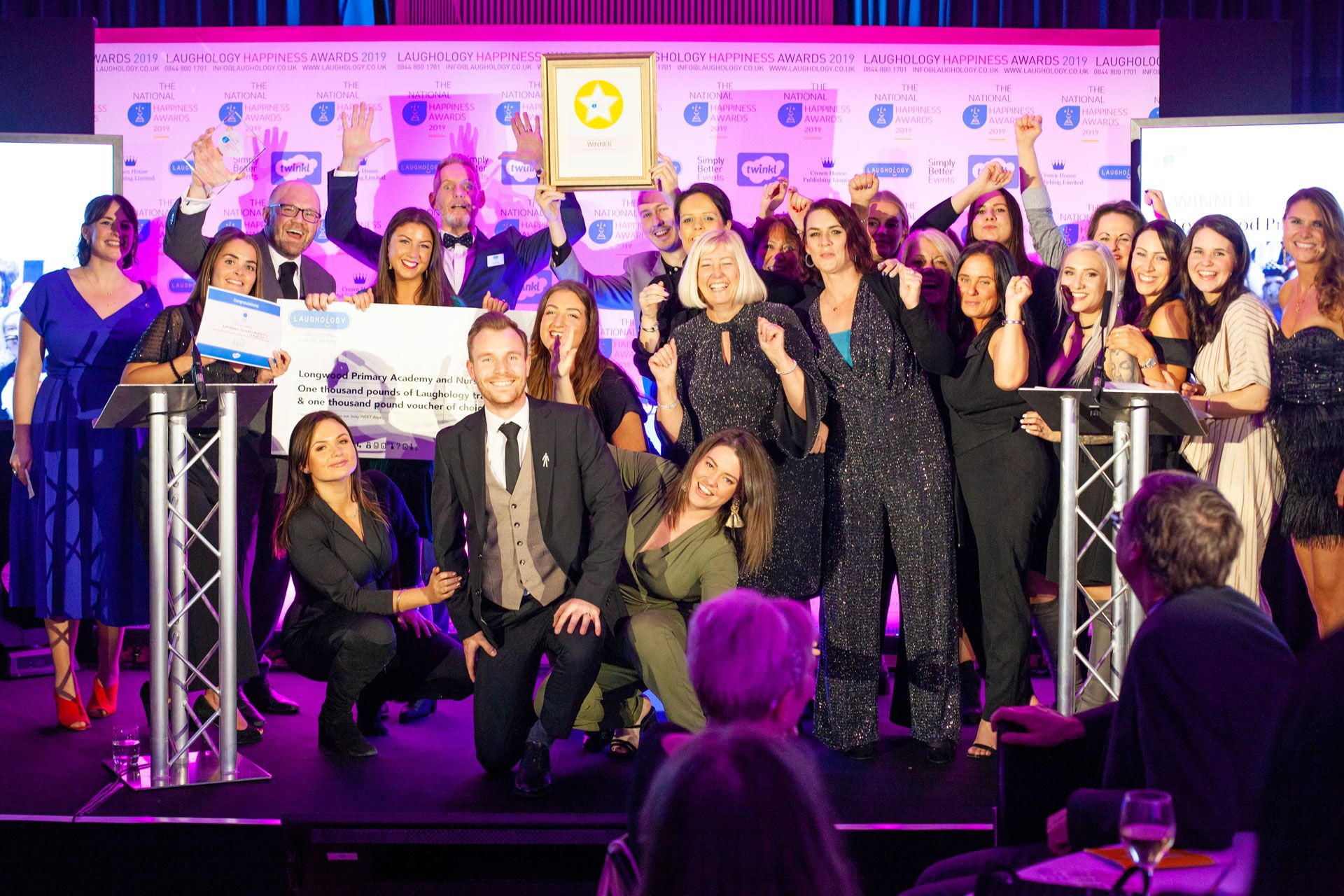 In an amazing night of laughter, suspense, fun and emotion, Tha National Happiness Awards showed the world what an award ceremony should be like.

On Friday night we rolled out the red carpet to welcome this year's finalists and crown the winners. Our all-singing, all-dancing ceremony was attended by happiness heroes from around the UK, all eager to find out who had won. The show was hosted by Stephanie Davies and Dave Keeling and we raised around £2000 for Haven House Children's Hospice. There was even a special message from the queen of daytime TV, Lorraine Kelly.

In a tear-jerking presentation, Happiest Child was won by brave five-year-old Freya Watson, who suffered a life-changing stroke after playing at a branch of Wacky Warehouse in September. Freya, from Hedon near Hull, has amazed her carers with her positivity and sense of humour, despite the challenges she has faced. She had major surgery before beginning the long road to recovery and has worked hard and laughed during lessons on the brain injury unit where she was treated. She was described by her specialist teacher as `truly the most inspiring pupil I have ever worked with over my ten years of teaching’.

Other happiness heroes honoured at the annual event include Longwood Primary Academy and Nursey which won the Happiest Primary School category. Four years ago, the school was in special measures with 20 times the national rate of exclusions. It is now ranked as good, with outstanding features by Ofsted thanks to the introduction of a range of eye-catching mental health and wellbeing initiatives, including a meditation pod for pupils and staff. The school in Harlow which was in crisis with only a fraction of teaching staff on contract. With a change of leadership, management prioritised wellbeing and good mental health. Pupils were nurtured with the help of mental health charity Place2Be. The school launched the 50 Things at Longwood initiative, providing pupils with an extensive list of character-defining and memorable childhood experiences. Improvements since have been remarkable.

Headteacher of Arthur Bugler Primary School, John Bryant picked up the award for Best School Employee and was cheered on by his team.

Meanwhile staff from Highfurlong School in Blackpool made the heroic journey to the venue in London in a minibus and were not disappointed after winning the Happiest Secondary School award.

In the Workplace sector Medvivo, a company that provides staff with mental health first aid, stress awareness and healthy eating advice was been crowned Britain’s Happiest Workplace. Based in Chippenham, the integrated urgent care service, has put the happiness of its employees at the core of its business. Staff there are also encouraged to raise money for charity and last Christmas the company provided food parcels and goodies for its service users.

The Happiest Team accolade went to NEL Consulting, where meetings are streamed live and recorded for colleagues who are unable to attend, and where expertise is shared via Lunch and Learn events. The team who attended were certainly happy about the awards and had a blast.

Happiest Employee was O2’s Hattie Jones, who bosses described as ‘a mentor to peers in her team and an outstanding performer’.

National Happiness Awards founder and Laughology CEO Stephanie Davies said: “What a night! The awards truly are the Oscars of the wellbeing world. We had some amazing finalists and it was truly encouraging to see so many organisations, leaders and individuals taking happiness seriously, and letting their hair down and having fun. At a time when there is so much uncertainty in the country, it has been refreshing to see so much positivity.”

Awards judge and Twinkl Chief Customer Officer, Leon Smith, said: "Schools, individuals and businesses do things each day to make people happy and it's something that we should take more time to celebrate. It's so positive that happiness and wellbeing are becoming an increasing focus in education and beyond. I hope people will be inspired by all the incredible winners and nominees to recognise someone who makes them happy and give them a big thank you too."