5 Strategies to Develop Your Child’s Self-Confidence 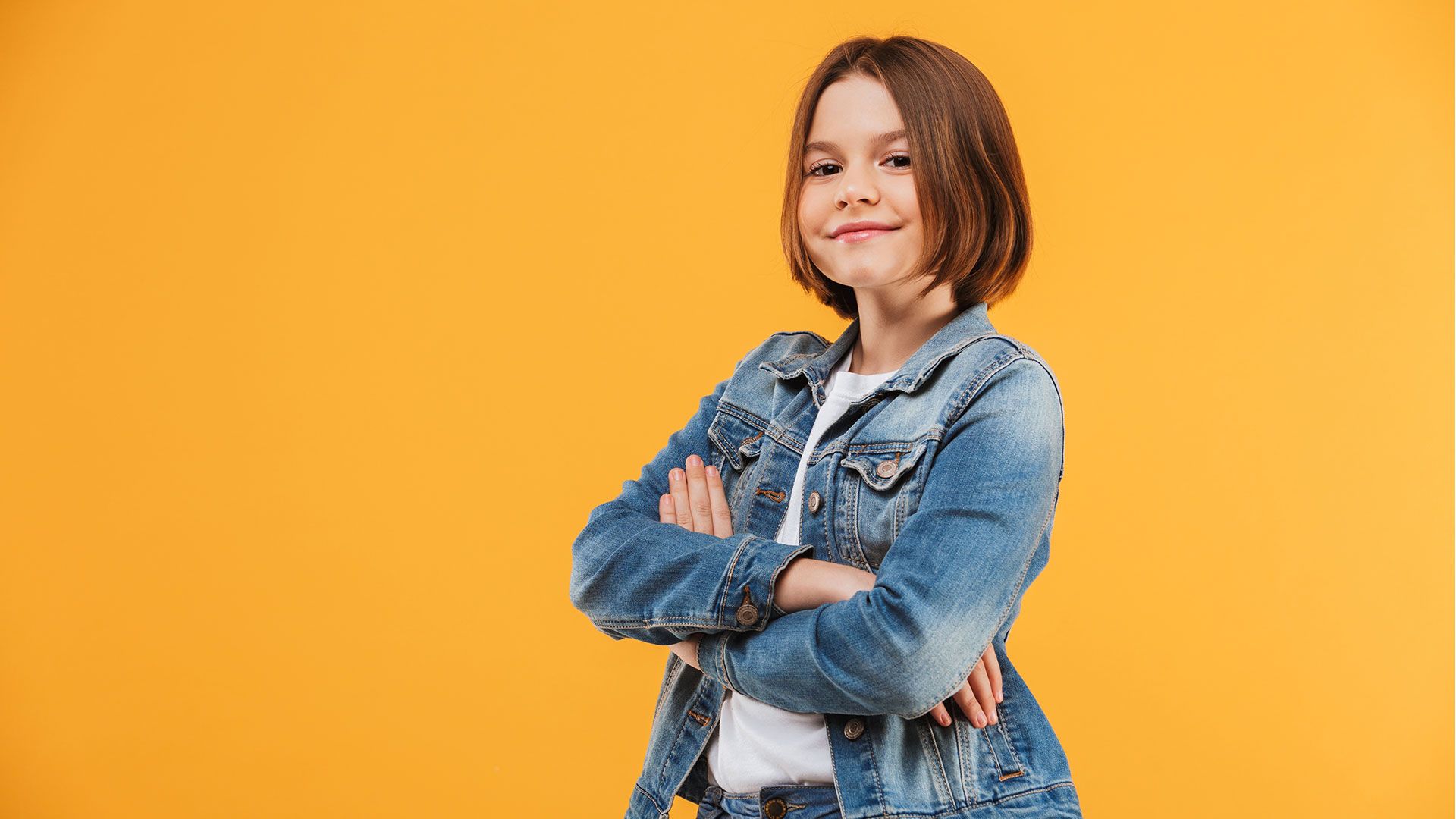 Isn’t it funny how some children seem to ooze self-confidence? Future entertainers, actors and comedians seem to have that certain ‘je ne sais quoi’ – here’s looking at you, Dave Keeling. Are these kinds of children just born with stars in their eyes and tap shoes on their feet? As they pirouette out of the womb, are their names immediately added to the list at William Morris?

If you are the parent of a child who lacks self-confidence, it can seem that way; that it’s just luck of the draw. Perhaps you’re shy or introverted and so you assume that it’s genetic. Even if it is, does that mean your child can never have the self-confidence of their tap dancing, solo singing peers?

Research shows that self-confidence can be learned. It’s a skill that can be practised and refined until we start to feel more confident in situations that previously terrified us. For some of us, it’s an ongoing battle between the desire to hide under the duvet and the desire to grow.

The Journey to Self Confidence

For children it’s no different. If you think back to your child’s first day at school, I’m sure you’ll remember the children who sauntered in as though they’d been attending since birth and those who hung back, timid and afraid, clinging onto their parent’s legs with a look that suggested they were about to be fed to a pride of hungry lions.

Maybe your child is still like that? Maybe your child, like mine, would rather be part of the ‘backstage crew’ during assemblies and productions, finally making it onto stage in his Year 6 leavers’ show as Ronnie, the non-speaking rat.

So how can you build your child’s self-confidence to enable them to participate more fully in school life, to embrace change and challenge with courage? Well, let me start by saying it’s a journey. You can’t expect to try some of these strategies and wake up in a week to find your child on a West End stage singing ‘Memory’ from Cats.

But if you’re prepared to put in the hard work, if you’re prepared to try some of the following ideas, you’ll begin to see a gradual change. A gradual improvement in how confident your child feels about approaching the weekly times table test or playing in a big match in their local football league.

It’s all about consistency, patience and support.

5 Tips for Building Your Child’s Self-Confidence

True growth and change happens when we have to do things independently. As parents, it’s tempting to do the little things for our children because we want them to know that we care. Other times it’s because we want to leave the house in the next century, so we do up their shoelaces so we don’t end up screaming into a pillow...

In order to develop self-confidence however, we need to stop doing things for them and start encouraging independence.

Remember what it was like when you passed your driving test? The first time you sat behind the wheel, you were probably mildly terrified. But the more you practised, the better you got until you passed your test. Et voila! Independence! And along with it, a greater confidence to try new routes, taking you to new places.

As soon as children realise they can do things on their own, their confidence improves and they try newer, bigger things that they may never have done before. Just like my mother, who drove to Greece the week after passing her driving test!

In your child’s eyes, you’re a hero. Well, until they’re teenagers and then you’re just about the most embarrassing person on the planet. But talking to them about their fears can really help. Opening up those channels of communication builds stronger relationships, but it also enables them to understand that you’re there to support them.

Even when they’re stroppy teenagers, knowing they can talk to you is so important. Why not share with them things that you’ve been worried about in the past? Tell them what you did to overcome those fears and build your confidence. Let them understand that it’s okay to be worried or nervous, it’s part of being human. It’s how we deal with it that matters. That’s how our confidence grows.

Talk about successes too. When they are confident enough to do things for the first time, discuss how it felt. Try questions such as:

Remember the strategies you think might work with your child may be the opposite of what they need. Just because they work for you, doesn’t mean they will work for them. By asking them what works, you’re giving them ownership, which, in turn, builds even greater confidence.

Encourage them to make decisions

If indecisiveness were an Olympic sport, my eldest would be a gold medallist. In museum gift shops, several decades seem to pass before we reappear, blinking in the bright sunlight. But making decisions is an important lesson for children to learn. It builds confidence because they begin to understand that, when presented with a situation, they can figure out what to do.

They won’t always make the right decisions and that’s part of the journey. Try not to dwell on any mistakes they make. Mistakes are how we learn after all! If your child struggles to make decisions and you lose several years of your life while they decide which drink to order in a restaurant, try presenting them with options.

Presenting your child with options takes some of the anxiety away and can support them as they grow. You won’t always have to do it because they’ll begin to be more decisive as their confidence grows, but it can certainly help at the beginning. Instead of giving them the entire drinks menu, ask them whether they’d like A or B. When they’re able to do that, offer them the choice of A, B or C etc…

Children are like sponges. They soak up everything you do and say, both consciously and subconsciously. If you model confidence, even when faced with something you feel nervous about, they’ll learn important strategies to apply to their own lives.

If you shrink away from trying new things or resist putting yourself out of your comfort zone from time-to-time, they’ll copy that instead and back away from challenging situations too.

You may not get this right all the time, but it’s important that you acknowledge the lessons you learn.

By talking openly about how you were nervous about riding the biggest rollercoaster at the theme park, but you’re so glad you gave it a go because it was such a great experience, your child will look up to you and admire you for it. It’s small things like that that really make a difference.

You don’t have to skydive or speak in front of hundreds of people on a weekly basis to show how confident you are, your child will be learning from the little things you try, regardless.

Children are curious creatures aren’t they? Are we nearly there yet? When can we have an ice cream? Where are we going today? Their questions can seem endless, but according to Paul Harris from Harvard University, we should be embracing their curiosity rather than telling them to pipe down.

By asking questions, children can gain self-confidence and begin to understand the world around them. Asking questions as they grow older will make them curiously creative adults too. New inventions are created by those who ask questions, those who ask, ‘What hasn’t been done before?’ or ‘How else could we find a solution?’

Give them challenges too and encourage them to ask questions to find the solution. If it’s something they’ve never done before, how could they find out what they need to do to be successful? This can lead to many new experiences and opportunities for your children too. It all comes from accepting, and building on, that natural curiosity.

Confidence comes from within. It’s not a natural gift. Yes, there are children who are confident with little effort, but for the large majority of people it comes from practise. It comes from getting comfortable with being uncomfortable. It comes from determination to be heard and understood.

Working in collaboration with your child’s school can help to bring out your child’s self-confidence. It might take years before you notice a change, but this is a marathon not a sprint. Persevere with the strategies listed above and soon you’ll see your child begin to flourish.

Instead of simply wishing our children were more confident, let’s give them the love, the support and the strategies they need to get there, because that’s what parenting is all about, isn’t it?

In the meantime, I’m off on the hunt for Ronnie Rat’s autograph before Hollywood comes calling…