FLIP-It for the workplace.

MODULE 3 - P IS FOR PATTERN BREAKING

Module 3 of the FLIP-It Thinking model and a look at how pattern-breaking can help with Wonky Thinking. It will help find the positives in situations, embrace challenges, and deal with change and transformation. For more modules and topics go to our online learning page.

Introducing module three of our FLIP-it thinking online learning burst. This week we explore Pattern Breaking (the ‘P’ in FLIP - clever innit, it’s the acronym we're most proud of, and we do a lot of acronyms).

The Power of Pattern-Breaking

Want to do things differently? In this video, our colourful Kerry Leigh explains exactly what pattern-breaking is

Reading time approximately 5 mins. Learn how to apply the final part of FLIP, consolidate your learning and start breaking patterns.

If I threw a ball at you, what would you do?

You’re probably thinking, ‘Well…I’d catch it, duh!” - exactly what I want you to think. You’d try and catch it because nearly everyone has learnt to throw and catch a ball. Even if, like Chandler Bing, you’re a ‘dropper’, you’d still instinctively reach out to grab it.

You see, any previous ball-throwing practise created a pattern of neural pathways in your brain, turning them into a habit.

What if I were to throw a ball at you and ask you not to try and catch it?

That would be harder. You’d be working against your habit. Even if you wanted to avoid it, the instinct to catch would still be there.

To stop this instinct, you’d need to show a greater awareness and focus on your arms. Your internal language would be, “Keep my arms by my sides.” Your imagination might show an image of you standing still.

Doing these three things repeatedly, to change a habit, is where PATTERN BREAKING comes in.

Everything we do creates pathways and patterns in our brains; our thoughts, emotions and behaviours are all neural pathways, which become stronger the more we repeat them.

As we’ve seen and read in previous learning bursts, some of these are helpful and necessary. Others, though, have gone a bit wonky. In order to break wonky patterns, we FLIP them. Simples!

But whilst simple, it’s not always easy. Whenever we’re stressed, bored or trying to multitask, the brain follows the path of least resistance – the wonky habit. If you’ve ever tried to diet, this will be familiar.

As with anything new, the first step is the hardest.

How to Start Pattern Breaking

Awareness is key. Recognise the ‘wonkiness’. Tune into yourself when you’re feeling stuck or stressed. Mindfulness or meditation can help ready the mind. Ask yourself:

Once you identify the cause of the wonkiness, you can pinpoint where to put your focus more easily. Alter your language and the images you’re imagining too.

It also works with positive stuff.

Think back to a time when you felt your most confident and proud. Where was your focus then? What language did you use? What images were helpful? Let those tools help inform your future pattern breaking.

Remember, the more you do something, the stronger your neural pathways become. To strengthen the process of pattern breaking, practise lots!

People can change. It’s easier to do when it’s something you want. Effort is required if that change is forced upon you.

If that’s the case, challenge your beliefs and reframe them. Think differently. ‘I don’t want to be stuck at home,’ becomes, ‘I can finally learn Italian – Eccellente!’

As Maya Angelou once said ‘If you don’t like something, change it. If you can’t change it, change the way you think about it.’

Finally, remember to be kind to yourself. Slipping back to the wonky side is common to begin with - that’s habits for you! Give yourself a hug (that’s still allowed I think), take a deep breath, smile and try again.

Laughology’s Buzz sessions are short, fun activities people can do in teams or pairs to explore a certain topic. Each Buzz session can be delivered in less than 10 minutes and has an activity and explanation of the topic. All the Buzz sessions have been edited to work virtually. They’re ideal for team meetings, huddles and helping teams to connect and engage.

Our cheat sheet will help you notice when someone is using negative language and what you could do to help them positively reframe their thoughts. 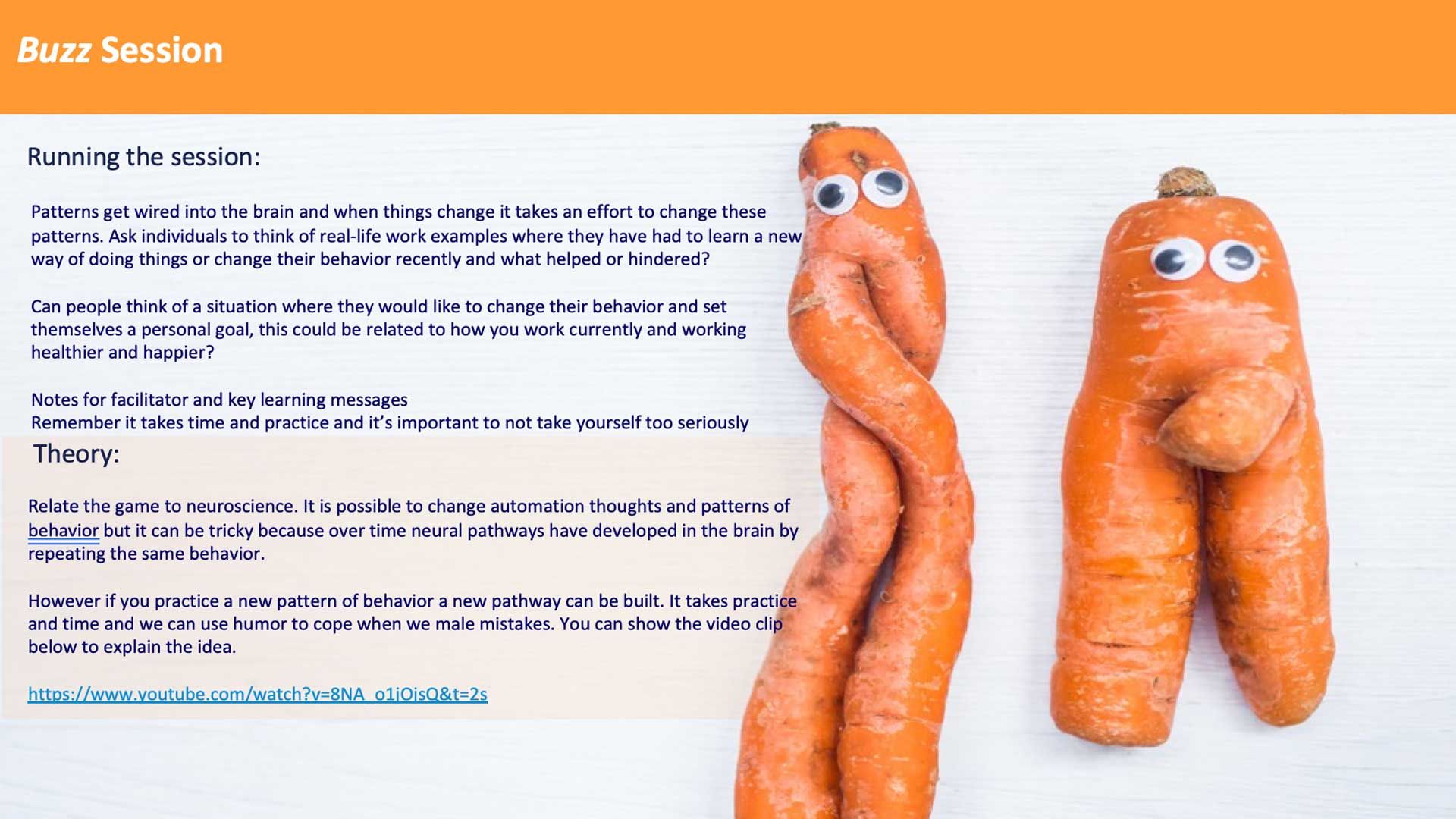 Coming up from 24th April, we have our new theme; ‘WFH: Connect, Collaborate, Communicate.’ We’ll be sharing top tips and practical techniques for staying in touch while working from home, how you can create the right environment (even virtually for team collaboration and engagement),ways to keep communication lines open, as well as structuring your day so you can work effectively. There will be downloadable cheat sheets, learning hacks and a few laughs along the way. Watch out for our live classroom too!