Sarah’s childhood highlights include training and performing as a figure skater and having a (brief) role as a photo story model in My Guy magazine.

Sarah’s childhood highlights include training and performing as a figure skater and having a (brief) role as a photo story model in My Guy magazine.

Sarah’s career began in Finance. After just one year, she realised that this had been a mistake. On the plus side, she discovered that the human resources department offered a stimulating variety of work and could give her the opportunity to focus on people; one of her favourite pastimes.

After re-training and gaining a post-graduate degree in human resources, Sarah got a job as a human resources generalist, gaining experience in employment law, recruitment, payroll and, best of all, the opportunity to develop and coach people to maximise their true potential. She chose to specialise in the design, delivery and full implementation of high-impact, practical and relevant training courses and one-to-one coaching.

With extensive experience in learning and development across pharmaceutical, telecoms, childcare nurseries and fast-moving consumer goods, Sarah is objective, empathetic and understands the needs of others and learning styles. She embraces projects with passion and thrives on developing creative ways to enable people to learn, enjoy, develop and become fully effective in their role. 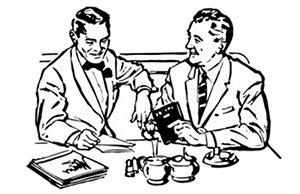 I trained for three years as a classical actor at the London Academy of Music and Dramatic Arts, the same drama school that Benedict Cumberbatch attended. After I left, I realised very quickly that I wasn’t going to be acting full-time and even when I did get work it wasn’t very well paid. So, in my early twenties, I started to plan what else I could do. I didn’t want to work in a bar or wait tables like most jobbing actors. A friend asked me to do some work in schools for him. It wasn’t an area that I had thought about but in a very short space of time I learned loads and started to realise that with my performance skills and knowledge, I could put across information in an interesting way.

Did you have an interest in psychology before you started working with Laughology?

As an actor, I had always been fascinated by behaviour and relationships because that’s what acting is. I had a degree of intuitive emotional intelligence. I would watch people and study how they behaved. That developed into an interest in psychology. I wanted to learn more about people and their foibles and behaviours.

I was presenting at a conference. I was doing the morning and Laughology CEO, Stephanie Davies, was doing the afternoon. She saw what I was doing and liked it. We talked and I became involved from there.

The real test for me is authenticity. Very few people who go out and talk to audiences practice what they preach. A lot say stuff, but they don’t do it.
The Laughology team have a broad range of learning and development skills to back up their specialisms, what would you say your strengths are?
I am great at being a catalyst in a room. I’m good at being deployed to create a buzz and an atmosphere. I can shift a room. Being a facilitator allows me to engage with people and be playful.

How are your skills best used?

I’d say that 60 to 70 percent of the time, you turn up to an event and people have had a long day of very dull keynotes. That’s the challenge I enjoy. You never know what you are going to get and it is my job to make sure those people leave that room feeling better than they did when they went in. The trick is to create an environment where people feel happy, and then hit them with some stuff that they’ve not thought about before. And that’s what Laughology does perfectly.

People are living longer and working longer. They no longer retire at 65 and businesses have started to realise that they have to keep people happy and healthier for longer so they can continue to be productive. There is also much more awareness of mental health issues. In education, primary schools have always been on board, and now Secondary Schools are getting there too. They are realising that although kids are leaving school qualified, they are not necessarily employable because they are missing the other stuff, which is what we talk about at Laughology; empathy, relationships, confidence, self-awareness and the ability to express thoughts and ideas. With all that’s happening in the world, people are having to get good at coping with change. And that feeds into everything we do in Laughology.

Simple. I’d ban homework. Nobody likes it. And I’d only employ people in schools who genuinely enjoy and like the company of young people.