Have you ever imagined you were in charge, you know, of everything? If I were Prime Minister, I would bring in a law against ugg boots, a total ban on Mondays, and ensure that everyone had access to decent mental health services AND that EVERYONE used them. So basically, we would be living in a mentally healthy dictatorship. All hail me! Erm, control issues?

Mental health and wellbeing in the workplace is currently a hot topic with many businesses investing in their most valuable assets i.e. their staff (and good coffee) which is to be celebrated. However, in some companies employees are feeling like lip service is being paid without any real mental health benefits. It’s easy to slip into ‘box ticking’ when so many of us are under pressure to deliver more for less, so if we can say we’ve boxed off mental health we can wipe our consciences clean and move on to the next thing on that never-ending to-do list.

Actually it’s not that difficult or time-consuming to create a mentally healthy culture.

Top tips on how to create a mentally healthy workplace culture:

It starts with you. Don’t wait for policy from HR or management. Whatever your role in the organisation, if you are open and honest about mental health you are giving permission for others to follow. Sharing real stories and experiences helps reduce stigma.

Laughology now delivers a Mental Health First Aid Awareness workshop for all sectors to learn about the facts and myths about common mental health problems and ideas for how to develop a mentally healthy workplace.

And guess what? People with depression can still have a sense of humour. A depressed person isn’t a ‘miserable’ person, and they certainly haven’t chosen to feel low. People with depression have good days and bad days, or sometimes just good moments where someone or something (or they themselves) have triggered humour. Embrace the use of humour with positive intent - people with depression will thank you for it. There is a lot of fear around mental health with people frightened of saying or doing the wrong thing. The best thing you can do is show interest and listen - really listen.

Its batted between people like casual verbal tennis. Player 1: How are you? Player 2: Yeah, fine, how are you? Neither person putting thought into the question or the answer. Asking how someone is can be an opportunity to actually find out what’s going on for them. Staff who feel valued and listened to are more likely to open up about a mental health problem and seek support before they reach crisis point.

We live and work in a culture where being a ‘grafter’ is valued and putting in a long day without breaks is worn as a badge of honour. When I am delivering Laughology training I often ask people whether they regularly take a lunch break. Those who raise their hands are always in the minority, and they often raise them slowly whie looking around sheepishly and sinking down into their chairs.

We need to work smarter, not harder. Working ourselves into the ground makes us mentally and physically ill, and ultimately less efficient. It creates a culture of fear where people are less likely to say they are unwell and ask for help until they have reached crisis point and feel like they ‘deserve’ support. ‘Mixed anxiety and depression has been estimated to cause one-fifth of days lost from work in Britain’

A more resilient workforce can be developed by equipping staff with improved emotional intelligence and by giving them tools to help them cope with pressure. Laughology’s FLIP it toolkit can really help by introducing some simple and effective cognitive tools that work using humour and psychology to flip perspective.

I’m fascinated by how our minds work, and by empowering others (and myself) to learn more about it - how to keep well, and how to support people when they’re unwell. Want to talk about it? I’m listening.

Go to our mental health in the workplace workshop page 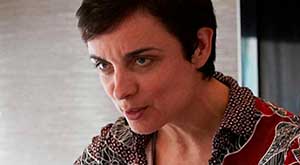 Kerry Leigh - is one of our most experienced and sought-after consultants and facilitators,

Tweet
Juliette Yardley's quick and simple steps for your...
Sarah Creegan's pursuit of happiness is denied by ...